(Sometimes) I have to concentrate

By Maisey August 13, 2012
I've had a massive mid-year attack of the Butterfly Brain (Jeff Explains BBA) and haven't actually managed to finish anything worth sharing with you fine people.

I've been been like the fussy eater at the wedding buffet of hobby. Picking at a few things here and there. The first couple of units of a Dark Angel army. The dusting off and base coating of a squad of my Imperial Guard army. Several aborted attempts at finding Vampire character models I actually like and fit with the back story. A scenery project of the garden of Moor to go with the Vampire Counts. A third Imperial Guard army that never made it past the concept stage after I really couldn't decide on a camo scheme for them.


Yes, that's right, I've been seduced by the Dark Gods' promises of chives and bacon bits (I'll let the buffet metaphor drop in the next paragraph, I promise) and joined the ranks of the ruinous powers.

Well I say that, what actually happened was that Em and I decided that it might be fun if we got each other model that we wanted to see the other paint. I went for Ajrac Rockfist for Em as she has a thing for big, hairy, viking types welding huge hammers and if you ask her nicely she might blog about her experience of painting him (Hint Hint!). Em settled on getting me the plastic Chaos Terminator Lord kit, which has more options than a well-stocked buffet (OK, I lied, but I'm trying to get into mind set of an evil chaos lord).

The kit gives you so many building options and contains a plethora of sharp pointy things to make a wondrously evil looking character. Not being a fan of the wildly over-the-top super-villain school of evil doer I went for an understated yet hulking form of badassery. Plus I love the steam-punk lighting claws and all their exposed working bits. 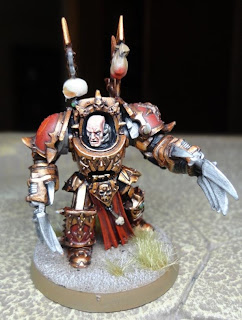 When it came to the colour scheme I spent ages agonising over how I was going to paint Captain Slicey here (I really need to work on my character naming system). I promised myself I wasn't going to have black chaos marines, I wanted something a little more original. I mean, everyone has bad guys dressed in black. It was tempting to go down the fully ruined path and have him corroded to heck and back again, but I was a little bored of the rusty metal and wanted to save the last reserves of that particular hobby juice for my undead. There was literally hundreds of possible paint schemes running through my brain meats. The solution was to sit back and try and think about what I think a servant of chaos should be. In my mind a Chaos Marine should be a towering, ancient, baroque manifestation of anger, pain, fear and aggression. Then once that was clear in my head, then the bronze and deep red just popped into my head and that was it. The scheme was settled. 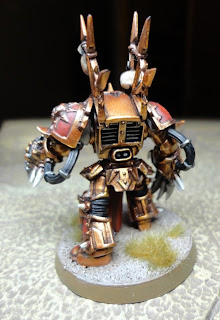 Now, as anyone who knows me even slightly will be aware, I can get very excited about random things like this and I've already started planning, plotting and possibly even scheming about where to take this next. The first step was a simple one. What does an evil overlord of doom need? Henchmen!

So where am I going after I finish his bodyguard? Well, I've been having great joy imagining Captain Slicey and his core of Marine followers at the head of a mass of traitor guard/rebel militia. With the new allies rules this is now a very valid option. Now just need to figure out how ramshackle/fanatical his human followers should be and how many tanks I can legitimately stuff into one list.

In the mean time I will finish another squad of Dark Angels and maybe a Vampire character.