By Jeff October 24, 2018
The recruitment march goes on! Even more Blood Angels scouts are reporting for final training duty with the third company.

I've recently bought a tray table for under my sofa and ooooh boy has it increased my painting output as I'm now painting while watching tv or youtube or whatever. That's why there's been a sudden uptick in my posts! These 15 models bring to a close the infantry component of the scout contingent and it's starting to look rather delightful.

The 10 bolter-armed scouts and 5 close combat chaps round out the long/medium/short design of the contingent. A third of it covers the advance, a third holds objectives and provides mid ranged fire support and the last third assaults strongpoints and deals with close contact. These will be bolstered eventually by a pair of Land Speeder Storms to carry the close combat and shotgun squads and a unit of scout bikes. All of these are being led by Scout Sgt-at-Arms Raduriel (Telion) who is currently on my painting table. 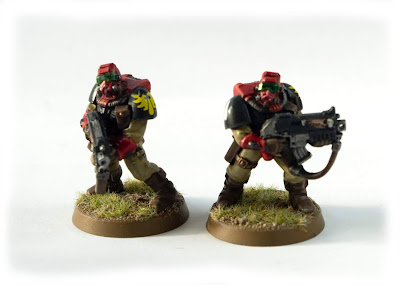 It's fair to say that my scouts have a somewhat... anonymous character. Even the sergeants are fully helmeted and there's not a lot to give them individual personality. That is 100% deliberate. I want the scouts to be utterly replacable as casualties, in campaigns they're going to be the easiest to recruit and haven't been around long enough to develop much of a visual style. Raduriel is different of course, but I haven't even named the sergeants. They have call signs instead. "Dominion Red" and "Dominion Black" are the sniper squads; "Seraphim Red" and "Seraphim Black" are the bolter squads; and "Thrones" is the callsign of the assault division, "Black" being the shotguns and "Red" being the close combat. 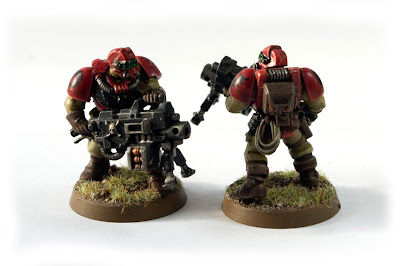 Given that I've been talking about lore and composition a lot, you may have picked up on the fact that there's not a whole lot of interest to talk about the painting that hasn't been covered in previous scout posts. However. I do have to talk about these heavy bolters. They. Are. Dreadful. God alone knows what the sculptor was thinking but they have different gauntlets, no sleeves and are massively muscled in that catachan "they told me I could be anything so I became a balloon animal" way. Terrible work on the arms. There wasn't much I could do about the lack of vambraces and the different glove style, but I could file down the arms a bit and make it look like fabric rather than bare flesh. It wasn't perfect but is better.

I'll do a whole contingent photo when I have Raduriel/Telion finished. For whatever reason I really seem to have the Blood Angels bug again at the moment so I'm taking advantage of it while it lasts to get through the few remaining squads of the 3rd company! Until then.