By Maisey October 01, 2018
We are all nerds. As nerds we take an interest in various different subjects. The one we share in common is war gaming. However, as fully rounded and well adjusted nerds we have interests outside of the war gaming sphere. This could be LARPing, video games, sports (yes sports, if you can name the winner of every FA cup final for the last 10 years you are a sports nerd), model horses, books, etc etc. One of my non-war gaming nerd streams is aircraft. I really do love aircraft and I have done since I was a child. As a child I attempted to make little model kits of aircraft, badly. As I was a child, I knew neither patience nor skill, but I can still remember the smell of the plastic glue and enamel paints (with which I used to ruin many paint brushes) and the joy a finished model can bring.

Now that I am a adult I felt it was time to rekindle this hobby and start making aircraft kits again, this time doing them the justice that the nine year old me could not. I have learnt a great many things about modelling since picking up war gaming but static display models like these are a whole new ball game. There are a range of techniques that seem to be best applied to display models, as opposed to war gaming models and there are things I wouldn't think twice about doing to a war gaming miniature that just wouldn't work on a display model.

In restarting there were a few fumbled learning attempts, in various different scales, before I managed to get enough of the basics right to be able to get a model finished. Or at least completed to an acceptable standard with only a few minor mistakes (of which each of these models have). I settled on doing models in 1/72 scale as this is a good compromise between price, shelf space, availability, and detail. A 1/48 kit has a massive amount of detail available, but is costly if you make a mistake, and even a small model takes up a large amount of shelf space. 1/72 means I can get a bunch of cheap kits (all around the £5-£10 mark) that won't make me cry if I get it horribly wrong, and I can have lots of them.

The first three models that I actually managed to finished are all from Airfix. We have the Supermarine Spitfire Mk1a (Read more here), The Hurricane Mk1a (Read more here), and the Boulton Paul Defiant Mk1 (Read more here). All three aircraft fought during the Battle of Britain and I have painted them to represent aircraft from that battle. I don't have a specific focus on that particular time/theatre but this was a practical consideration as I could pick all the colours in a single paint set, so it made sense to do a few models all using that set rather than having to invest in lots of different pains for just a few models. As I learn more and progress I'll pick up more paints and diversify to other nationalities/periods/regions.

So what techniques did I use here that I don't normally use on a war gaming model (some of these will get transferred over)? 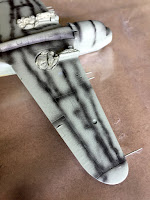 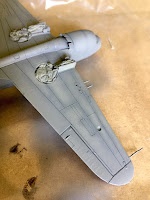 Pre-shading: I've attempted to use pre-shading on the undersides of all three. This is an airbrush technique where you prime the surface in a lighter colour, the use black/darker colour to darken the recesses/panel lines etc, then go over the area in the final colour, allowing for the tonal change to show through. 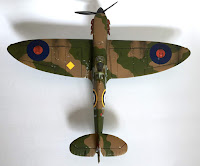 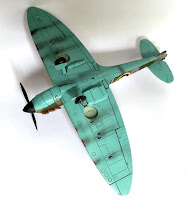 Post Shading: Like pre-shading but you darken parts after the main colour has gone down. I found this more useful on the camouflaged upper surfaces as the pre-shade just doesn't really show through the multiple layers of colours. 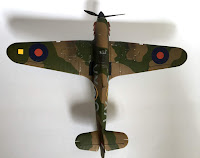 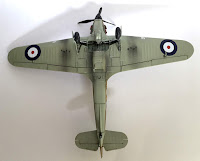 Masking: As the main body of painting was done with an airbrush I employed lots of masking to keep a crisp transition between colours. In larger scale models I would have to consider that all transitions would need to be slightly softer, but at 1/72 a hard line appears to work just as well. I would start with the undersides, then use fine masking tape to cover over the parts I wanted to keep that colour. Then proceed to the next colour. I also did this with the canopies, they got masked off so that the frames get painted the same as the rest of the aircraft and it protects the interior from the airbrush. I can say that by the end of the painting process the model looks like a mummy of masking tape, but it's one of the most satisfying moments when you can finally remove the tape and suddenly you have a completed model underneath. 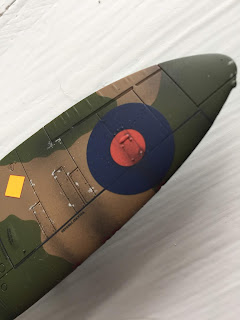 Decals: All these models have dozens of decals applied to them. Starting with the large roundels all the way down to tiny warning labels. I have to admit that I used to hate the decal stage. However, with practise (and a few specific products) I've managed to get some decent results on these. The matt paint once it has been applied to the model is slightly rough, and when a decal is applied over the top it can trap little bubbles of air/water/decal solution under it. When it dries it doesn't form a proper bond and you get the little white patches (silvering) where the decal film isn't stuck down properly. The best solution to this is to give the model a smooth coat of gloss varnish before placing any decals down. This give the decal a better surface to stick to, it also helps hide the transition between the printed detail and the backing film on the decal. I use two chemicals when applying decals, Microset and Microsol. These help soften the film that the decal is printed to and allows it to 'melt' on to the varnished surface. This gives a much tighter bond and allows it to form around details, given a painted on look. Next I seal them in with another coat of varnish. This allows the film to disappear between the layers and helps protect the decal from damage. Finally I coat the whole model in matt varnish to blend everything in together. 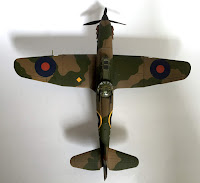 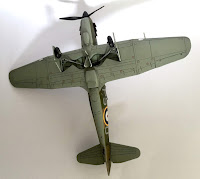 Oil washes: I've only tried this on the Boulton Paul Defiant but I've tried doing some gentle weathering with a wash of thinned down oil paints. I'm still playing with this one but it appears to give a nice natural weathering finish. As oil paint takes about three years to dry (or seems like it) you have plenty of time to wipe off the excess, leaving as much or as little filth as you want. It leaves a nice grimy finish. You can also apply the oil paints neat and use a dry soft brush to blend them in to give oily streaks here and there.

That's a brief over view on the main techniques I've used. If there is any interest in any of these I can do a detailed step by steps when I do the next model. Let me know in the comments if you want more.