I'd been meaning to make something like this unit from the moment I started to collect Blood Axes, a special forces unit of orks full of Dakka and punching. Eventually they will be riding in their own Chinork transport but I've yet to settle on how I want to make it. For now, they'll ride in the Battlewagon. Some might be looking at the weapons choices and cocking an eyebrow but these are no normal shootas. Oh no. These are kustom shootas and this unit alone can kick out 40 assault shots a turn...

Of course, it wouldn't be Orks without some close combat punch to back up da dakka so there's a couple of power klaws, a killsaw and a big choppa among their number to deal with tricksy targets in close combat. The models are of course basic nobz with a lot of weapon conversion (more on that later) and some lovely Spellcrow Ork heads. Spellcrow were lovely enough to sell me half a pack of each of the beret and gas-mask heads so I didn't have a ton of duplicates I didn't need. 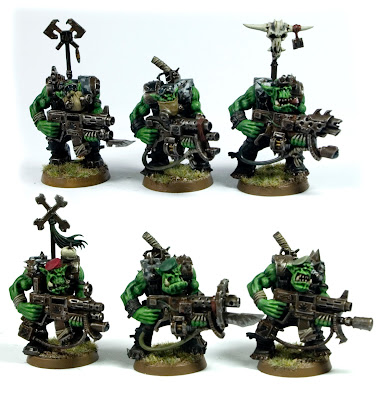 The main focus of the conversion work was the kustom shootas. I made carbine versions for most of the close combat guys by sanding flat pairs of shootas and gluing them together storm-bolter style. For the assault-rifle looking chaps I needed more Orky ingenuity. There are only two kustom shootas in the kit and both of them have kombi-weapon elements added. I cut out the skorcha/rokkit launcha elements and variously worked in extra barrels, stikkbomb launchers, bayonettes, torches and other elements. There's even an exhaust pipe in there masquerading as a gun barrel. I'm really happy with how they turned out, for such similar models there is a nice variety in there. 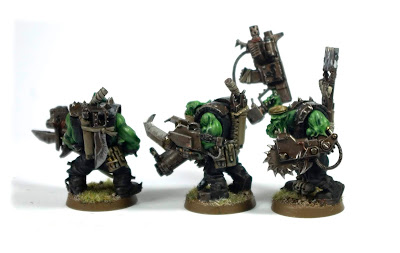 As far as painting goes, there's not much to talk about. I wanted them in black fatigues and rusty equipment. I decided that khaki canvas webbing and gas masks would work nicely and picked out the berets in a variety of different service colours. Something worth chatting about is the skin, I used the GW progression for Ork skin (Waargh flesh, Biel Tan Green,Warboss Green, Skarsnik Green, Waywatcher glaze) for the first time and I am quite a fan now. My Orks have always been quite an intense green to stand out amongst the dark camo clothing so this system is lovely. I wasn't sure about it until the instant the glaze went on at the end. Gorgeous shade. Rust was a complex scheme of using Ammo rust coloured paints with drybrushes of metallic shades and then black and brown mixed ink over the top. I used some additional enamel engine oil from Ammo to add some grease to the mechanics and sharpened up the blades with lighter metals. 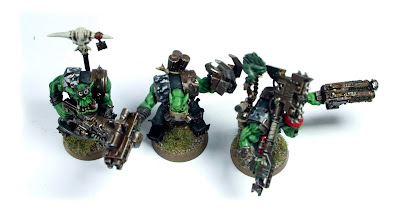 Finally, because they are Blood Axes and the scheme of the army is camo colours, I went for some urban camo to fit in with the SAS vibe. I used three schemes, a splinter style with triangles, a more traditional style with overlapping wavy blobs and an attempt at a crude digital camo. Mercifully they are orks so crude is absolutely in their wheelhouse!

Can't wait to get a Chinork converted up for these lads. Just need to nail down my various ideas and maybe poke the arch-converter Mark (Assistant Kogz) for ideas! Until then