By Jeff October 08, 2018
Greetings! My grind toward having my own slice of the Blood Angels 10th company continues and this time they're even sneakier...


Yup, it's scout sniper time. With their camo cloaks, these at least look like they can conceal themselves more completely for relatively close-range recon and fire support. I've had these models for ages, almost aeons, um, I might even have bought them and assembled them when they first came out... I dread to think when that was. But, they are finally, finally out of the to-be-painted pile and we can thus talk about them! 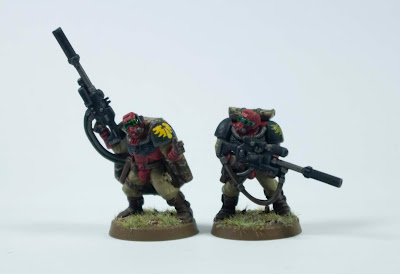 The scouts are painted in the same way as the last lot so I won't belabour that point too much. I needed to do some extra work on highlighting the guns as they take up a huge amount of real estate on the models. Something to notice in the picture above is that I didn't realise until too late that the transfers (thank gods only on four this time) I was using was from two different eras, the one on the right: no white backing, the one on the left, white backing. Makes quite the difference and I had to drab that down with a bit of casadora yellow to make it less yellow. The one on the right just looks like it has weathered and faded so I don't mind that it looks so different. Presumably the left-hand sergeant is a bit more diligent about re-painting his armour. 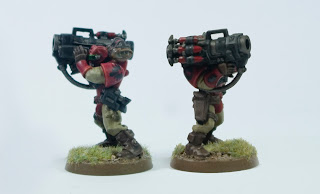 Now, the eagle eyed among you will note that the gentleman above is the squad's only missile launcher. That's because I... um... lost the other one. I don't mind having nine snipers though as it makes sense from a stealth role to have only one "go loud" boomstick. I also really like the old fashioned missile rack on the weapon for the scouts as it feels right to keep everything compact. I was debating on colouring the missiles to determine role but thought it would introduce too many spot colours. In the end I decided that the different shapes would do fine for differentiation and just keep the red and black of the rest of the squad.

Given that I'd lost a scout somewhere along the way, I needed a stand in. Luckily I had a random Storm crewman from somewhere lying around. I armed him with a sniper rifle from the bits box and set to figuring out how to pose him as he's clearly sitting. Finally, I hit upon a pile of supplies to keep the squad supplied on long patrols. It's given him a somewhat casual air which I rather like. There's got to be a tiny percentage of scouts that are flunking out and need yelling at by the sergeant some more after all... 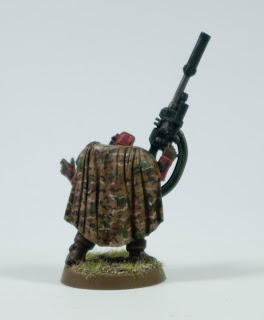 But the star of the show of a sniper squad are, of course, the camo cloaks. With camo there is a ton of options out there, but I wanted a versatile scheme that would work in a variety of theatres. My favourite is one currently in use by the British army, Multicam, known in Britain as Multi-Terrain Pattern or MTP. It was adopted after noting that troops in Afghanistan were transitioning from desert, to lush river valleys to villages in the course of one patrol. Using the old single terrain patterns meant that they stood out like sore thumbs in at least one of those. MTP does a decent enough job everywhere rather than a perfect job in one terrain. Of course, that does mean figuring out how to paint it, and as I've done the hard work I thought I'd share it with all of you!

Start with a nice smooth coat of smooth beige, I found German Cam. Pale Brown (all paints Vallejo) to be the best match. Looking at the camo scheme, the next largest patches are a khaki colour (Khaki Grey) that covers about half the available space leaving trails of beige running through it. Over this are smaller irregular splats - technical term - of a desaturated brown. I couldn't find a perfect match in my collection but Flat Earth with a dab of German Cam. Pale Brown came closest. Keep these brown patches attached to the Khaki leaving those channels of beige. Then even smaller patches of green (Cam. Olive Green) also keeping to the edges of the khaki patches. Finally some horizontal irregular lines of dark brown and flat off-white (German Camo Black-Brown & Deck Tan) are applied linking the beige pathways with the other colours.

The last thing you want to do with the scheme is to run a couple of layers of thinned Agrax Earthshade into the folds of the cloaks in order to provide some shading. It's almost impossible to highlight a six stage complex scheme like this without going mad and/or blind or taking the rest of recorded time. Luckily the shading does enough work. I think they look cracking, let me know if you want more of these kind of mini-tutorials and I'll put the effort in.

That's all for today folks, there's definitely more scouts to come - 10 bolter and heavy bolter toting ones & 5 close combat ones - but I might need a palette cleanse before then. Till then