Greetings fellow bunker dweller! We're all doing a bit of a 2018 retrospective before launching in to the inevitable hobby glee that will be 2019, and now it's my turn! Casting our minds back to the early, early cold days of 2018 we were in the frozen depths of Frostgrave:


Still very much enjoying Frostgrave as a game, it's ideal to pick up for a spurt of games. Advance the personal narrative of the wizards and then put it away again for a while. It's also a place for me to park random fantasy miniatures and monsters that I like the look of but have no other purpose for. Hurrah for collecting facillitation!

The real meat of 2018 though was once again the Blood Angels, I had another burst of BAngles keen and this translated into a few new units bringing me ever closer to a full company of psycho vampire space marines!

Yup, that was a third of a company of scouts, and I'm not done yet, there's bikers and storms in the future to help these guys get around. While we're on the subject of scouts, one of the models I'm proudest of this year:


Seriously pleased with him and indeed with his cohort in BAngles middle management the newly minted Lt Antargo: 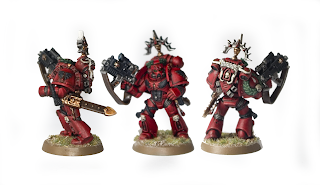 I really ought to get his opposite number painted up for a wingey-Lt. Unbelievably, this was not the last of the Blood Angels for this year. We also had the poor doomed dudes of the Death Company getting quite the expansion.


Thankfully, that really is all the Blood Angels for this year, promise! For a total change of pace, if only a mild change of name, my Blood Axes also got a modicum of love prompted by the sparkly new codex in the form of the Speshul Ork Service:


And in another sharp change of direction I started another Inquisitor warband:


Phew! That's everything that I've finished. There's a ton of prep work in assembling scenery and Necromunda gangs (more of that later) that I have no photos for. Believe it or not, I still think I've had quite the quiet year hobby wise. These models were painted in the brief, intense bursts of activity that I found the mojo for. I had some wonderful gaming this year but wasn't able to achieve as much painting wise as I might have hoped for. That having been said, when I lay it all out here... it's still quite a lot! The main reason for the bursts, I think, have been the redirection of a lot of my creative energies, first into the game that Charlie and I wrote. (Find all about that here!) Second it's gone into building my day job which has me making stuff like this: 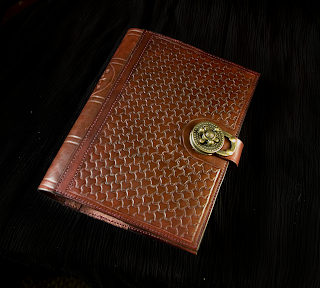 See, I'm a freelance leatherworker in real life, a job that needs quite a lot of creative energy poured into it each day. As a result, I'm occasionally a bit tapped out when it gets to the end of the day and where the time to paint would be found. I'm getting better at managing the ol' creative flow though so hopefully I should be able to balance hobby mojo and business mojo a bit better in 2019.

So what is the deal with 2019? What are my plans? Well, as is always the case, no plan survives contact with the Jeff but one thing looms larger than all others at the moment:

Yup, we're going to the Underhive. Spring 2019 will see me running a Necromunda campaign for the Bunker dwellers. It's going to be bang tidy as we say in my neck of the woods. Really looking forward to it. As far as other projects go, I imagine more Blood Angels and Inquisitor are in the future, I'd like to do some fantasy painting but that will have to wait for the mojo to strike.

I wish everyone a wonderful, creative, productive 2019 and may your dice roll better than mine!