2018: Japanese Year of the Airbrush

So it’s 2019 (It’s been 2019 for a while – Ed.) and what better time than the beginning sort of the beginning of the year to reflect on all the wonderful things that happened in 2018.

First up, I got two ‘Nauts finished.

I also gave them something to carry around and effectively started a Blood Axe faction for my Ork army at the same time.

Later on in the year, I painted two fantasy models that have been sitting around for years waiting for a coat of paint.

I then went completely mad and painted something that was neither an Ork nor a Skaven (Madness) and completed an Astra Militarum Kill Team. The team is a commercial mining team led by squats and mostly consists of hired combat engineers. 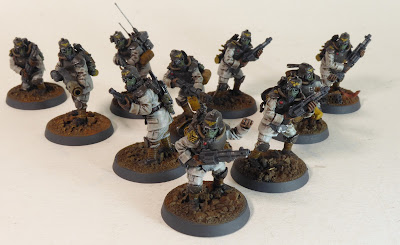 The Squats were given to me by my cousin and were some of the first miniatures I ever owned. I chose a muted paint scheme with a hint of 90’s dayglo for the nostalgia factor

The Squat with the 12 Gauge (my pitboss) is a Heresy Miniatures dwarf miner I’ve had kicking around for an age.I painted him in working orange coveralls, HiVis tabard and a Black Hat*.

I made the hat look plasticky by giving it a coat of gloss varnish after painting and I spent a little longer than usual on the gun – trying to make it look a bit more like a Purdey than a mass-produced weapon.
In case anyone is interested, I’ve included the homebrewed weapon stats I use for the shotguns below. They seem to be roughly on par with their las equivalents in terms of balance i.e., I still lose all the time.

And that was it for me for 2018. I did make a start on a pretty massive project which I won’t reveal yet, but here’s a sneak peek… 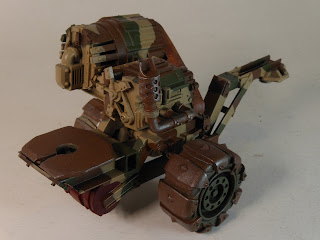