By Charlie January 14, 2019
We've begun a new year, and what better time than this arbitrary milestone to turn over a new motivational leaf and  do some exercise clear more hobby backlog?

Every time I post pictures of some newly-finished Fantasy minis, I feel the need to justify the square bases. This is clearly a self-imposed need brought on by years of staying current with GW's games; it's not like the Warhammer Community team send ninjas to round off my bases in the night and torch the movement trays. That'd be uncharacteristically aggressive of them.

Today's helping of square bases provides further reinforcements for my Empire collection. As usual, I've attempted to distract from the very basic techniques used on the troops themselves with an ambitious banner. (Hints on doing your own can be found here.) 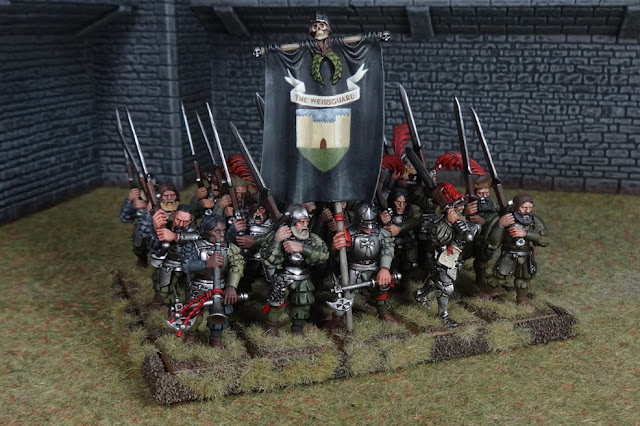 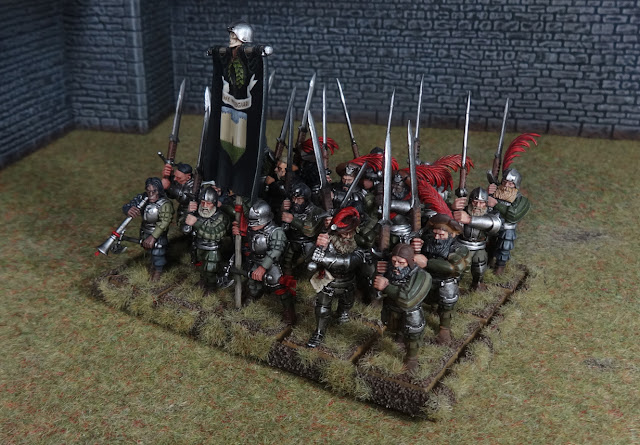 Of course in order to figure out what to paint on the banner, I had to figure out who these guys are. On maps of Hochland, there is a military base right in the middle of the Weiss Hills called Fort Schippel. These guys are the cream of its garrison; even if some of the regiment leave on campaign, there will always be some of the Weissguard defending Fort Schippel's walls. To emphasise this role, I shaped the design on the banner like a shield.


You may have spotted that the unit champion is one of the previous generation of greatsword sculpts. I've had this model since waaay before I got into Warhammer. No idea how or why I had it... presumably some kind soul donated it to me. Tragically I didn't take any photos of him prior to re-priming... my teenage self had painted his skin with Bronzed Flesh and Chestnut ink (imagine the worst, most blotchy artificial tan possible) and painted his beard with Sunburst yellow (i.e. neon). Bloody magnificent.

When I got to doing this regiment I looked past my neon horror show at the model beneath, and like many sculpts by the Perry twins, it's a nice, toned-down mini that deserved a fresh lick of paint. I might honestly prefer the metal sculpts - they have more armour, and look more, well, real. But let's face it, not having 10 copies of the same 3 models is an improvement to the cinematics, and plastic is so much less prone to chipping and other nonsense, plus the plastic greatswords kit has been a wonderful source of components for my army as a whole. Anyway, point being... shout out to the Perrys.


In my ongoing mission to finish off any assembled but unpainted minis loitering in my cabinets, I also painted a unit of crossbowmen. These guys have been awaiting paint for at least three or four years. It seems when I sprayed them I'd neglected to note the epic mould lines still on the models... oops. I got rid of some, but didn't spot everything. Ah well, they're hardly a centerpiece unit so I doubt people will notice in-game so much. Still... I did a little dance of shame, then pushed on. 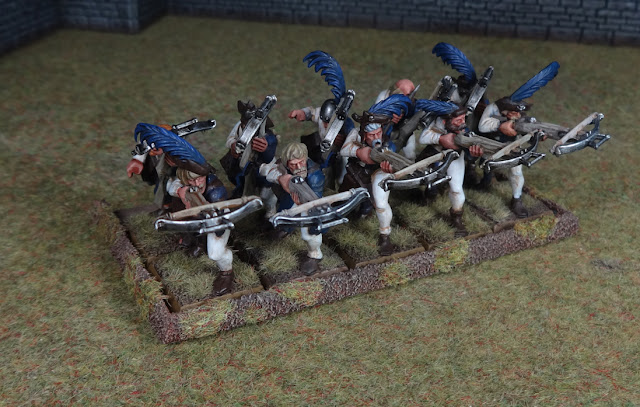 Two potentially helpful notes on the (quick and simple) paint jobs here: the metal is very quick to do... it's a basecoat of Army Painter Gunmetal followed by a coat of Nuln Oil Gloss, then a quick highlight of light silver on the most pronounced edges. I'd do more work on a character model, specifically I'd line in the shadows with something more matte, but for rank and file dudes I'm finding this really fast.

The second note is the filth wash. I used to do this with a 50:50 mix of Graveyard Earth and Scorched Brown with an load of water, but since those paints were retired and current Citadel/Vallejo paints don't like being turned into washes, I was at a bit of a loss. Then I came upon Army Painter Dirt Splatter. Add a little water, slosh it over the model, and the effect is almost identical. 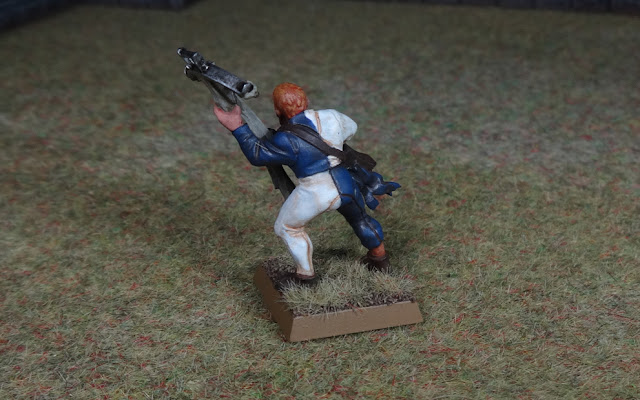 Having got these done with surprising speed, I kept up the momentum and started on the similarly neglected outriders sat next to them. Suddenly I'm in danger of having painted all the stuff that's been sat around for so long; there'll be just the griffon and the free company to go.

If there's a point lurking somewhere in this post, it's this: when your finish a unit (or perhaps while the first stage of the basing is drying), don't stop painting. Immediately do the first stage or two of the next unit. Psychologically, once something's been started, it often seems less daunting, so it's easier to maintain that momentum you've built up.