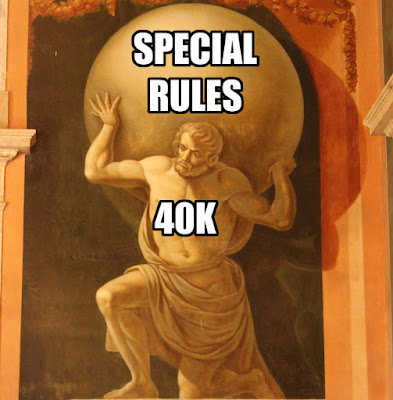 In this post, I’ll be questioning the value of having a special rule for (almost) every unit in a wargame. This is intended largely as constructive criticism of Games Workshop, and specifically the 8th edition of 40K now that we’ve got pretty much the full set of codexes. Let me preface this with saying that I’m a fan of the current edition - it’s had me playing a game I’d not really been into since 5th edition!

I imagine there will be many who disagree with my overall point, and I’ll be happy to discuss at length in the comments section if that’s the case - much like the surprisingly impassioned (and, in one anonymous instance, straight up troubling) responses my post about female primaris space marines. Of course, the odds of this post being as divisive are essentially nil. See what you think.

What do I mean by special rules?
I’m making the assumption that anyone reading this knows what I mean by the term special rules, be they ‘universal’ special rules, faction-specific rules, or unit-specific special rules. I’d define them as any rule a unit of troops or a weapon has in a wargame which is not covered by their statline.

Why special rules are good
They can achieve two things. One is to allow for effects which are too niche to incorporate into the basic mechanics of the game. Since not all units are terrifying supernatural monsters, it makes sense that you’d want to have a special rule which you can apply to anything that’s unusually scary.

The second thing is that they can add flavour. In 40K, the small weedy gretchin have a special rule called surprisingly dangerous in large numbers, where big units get a bonus to hit. On the face of it that seems flavorful, but I’ll return to this example later since it’s a good one.

Why special rules can be bad
The more rules you have, the more complex and bloated a game becomes. If every unit has its own special rule, then a major component of being able to compete and make intelligent decisions lies in simply remembering more rules than your opponent, which some people (including yours truly) find to be a less compelling challenge than developing an understanding of strategy and manoeuvres. Obviously you want different factions to be distinct, and for players to feel like they've learned how to combat the challenge offered by those factions, but if the only challenge is learning the synergies of certain rules then the actual gameplay starts to run on autopilot after a while.

As such, any ruleset is trying to strike a balance between clunkiness and blandness.

They’re also a double-edged sword, in that if a special rule is badly written, its attempt to create additional flavour can backfire by having an effect which makes no intuitive sense. Let’s return to our gretchin example (surprisingly dangerous in large numbers). As soon as you have 20 or more grots, they all gain +1 to hit. I can understand a large mob being braver (safety in numbers) but why are they suddenly more accurate?

Another example would be your basic ork boyz. If the unit has at least 20 models in it, they all get an extra attack. This is clearly intended as a way to encourage some big units of footsloggers, but it seems strange that as soon as the 20th model in a battlewagon is the army’s warboss, the whole unit gets less fighty since there’s now only 19 of them.

I get that the rule is probably intended to reward big foot-slogging units, but wouldn’t it be simpler just to make boyz cheaper so as to make it tempting to take them without transports? That way a Goff player won’t feel gypped when losing one or two boyz to overwatch won’t literally cost them 20 attacks in the coming fight.

The flavour debate
Having a unique army with its own character and charm is one of the most satisfying elements of wargaming. It’s argued that one of the ways to achieve this is through special rules. I'd argue it's one of the least important ways.

Let's take the aforementioned surprisingly dangerous in large numbers rule mentioned above. In terms of flavour, what does it tell us? That they're individually feeble and that people might underestimate them. This is not conveyed by the rule, but by the name of the rule. The actual rule gives a group of 20 gretchin, on average, an extra 3 Strength 3 hits compared to a unit of 19 gretchin.

Now, what does their stat line tell us?

Their low strength and toughness tells us they're diminutive. Their comically poor leadership tells us they're cowards. Their decent ballistic skill tells us they're not idiots. That, to me, conveys a lot more flavour than the special rule, and since the SDILN won't make much difference to the game, why is it there? What purpose does it serve? I have to confess I'm not sure. Were it up to me, I'd probably just remove it.

This is not an argument against all special rules, it's just an argument for careful editing. Furthermore, I think a heavy focus on special rules, faction rules, and all that jazz can take the focus away from what I consider to be much more important factors when it comes to flavour: visuals, background, and units.

If, overnight, all the space marine codexes were suddenly merged into one army list, and there was no rules difference between the chapters, could you still build something that looked, played and felt just like an army of Space Wolves? Or Imperial Fists? I'd argue yes. Unit selection, play style, details on the miniatures, and the paint job all do a lot more than some special rules. Don't get me wrong, I love that we have all these codexes, I'm just trying to illustrate where special rules really sit in the hierarchy of flavour.

Injecting your own flavour
Another thing that greatly affects how the army’s character comes across is how you play them. If you're into matched play then fair enough, you're always going to be looking for the ‘optimal’ units. For more narrative gamers though, you are free to have your army act in line with their characterisation, rather than being forced to do so by a special rule. A wargame where the flavour happens automatically is in danger of creating very homogenised interpretations of particular units. I think it would be perfectly reasonable for a rifleman to be a devotee of Khorne, realising that he can kill far more people with a gun than an axe, and taking pride in his horrifying kill count, and the martial efficiency of his work, but if (hypothetically) the rules say “Khorneate characters get +1 attack in melee” then that naturally encourages a more simplistic interpretation while also adding an extra rule to remember.

By contrast, Frostgrave has no special rules relating to its wizards or henchmen; all its flavours are delivered via stat lines, and yet I've never struggled to end up with believable, entertaining characters and flavour. I’m not saying 40K’s a better or worse game than Frostgrave - they’re very different beasts - but I have to wonder if we’ve got to the point where we don’t feel like a unit has sufficient flavour unless it has a special rule, and I reckon the imagination of wargamers doesn’t necessarily need that crutch.

Final thoughts
In closing, let me reiterate: I’m enjoying 40K, I just wonder if it’s starting to accumulate some of that 7th edition bloat. To be fair, there’s no way the GW studio could’ve cranked out so many codexes without one or two bits of fat than needed trimming, and when have we ever had all the game’s factions packing a codex of such similar vintage? It’s undeniably impressive.

Hopefully that all read as food for thought rather than whining! Now, I’d better get back to the paint station...