By Jeff April 29, 2019
I'm not sure there's any more horrifying concept in the 40k universe than the Genestealer cult. Think about it, demons need a weakness in you to get in, to manipulate you. Mutation through chaos influence tends to be a reward or punishment for actually worshipping them. Capture and torture in the depths of Commorragh is at least against your will. No, the Genestealer cares nothing for that. A dark alleyway or the corridors of a ship, a noise from behind, glittering eyes... now you are the proud parent of a monster. A monster that you love, that your brain makes beautiful. Who you'd die to protect. Gods I love Genestealer Cults...

So it might be a bit of a surprise it's taken this long to make one... Well, not really, see here's how it went: The new neophytes and acolytes turn up in Deathwatch Overkill. I'm immediately in love. The boxes come out and they're just as good. But the army's a smidge thin, I'm not sure I want to be collecting guardsmen with funny foreheads. Now, though, oh now we have a new codex, stunning new models, a real depth to the army and my ambitions have shifted from RPG antagonist (I first painted some of these for one of Charlie's Deathwatch scenarios) to full blown army. 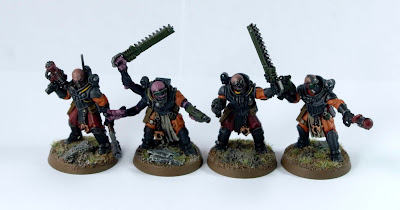 Given the industrial appearance of the models I always had it in my head that the army would be from a city-sized refinery and mineral processing plant. This is going to be run by House Ortag, which in my head is rapidly becoming my personal Weyland-Yutani, and thus have a "corporate colours" scheme. So I went for safety orange for the overalls, an industrial red for tools and weapons belonging to the corporation, and neutral grey for everything else. Stolen weapons would be military green and the webbing that went with it would be a nice military khaki.

Because people often ask for paint recipes and the like (and it really helps me to have this stuff written down), here's the broad strokes of painting my cult, it's been deliberately kept simple as I really, really didn't need another 7-stage red Blood Angel incident...:

It's probably worth mentioning that skin a bit more, see, in my head I see the cult's skintone shading from purple to human depending on how "genestealer-ey" they are. I.e. the closer in generation to a purestrain they are the more purple their skin. The 4th Generation neophytes are almost human. Oh, and a headcanon rewrite as no-one who knew anything about genetics and hereditary was involved in writing the genestealer lore... 4th Generations in my world are the first generation capable of procreating with each other rather than needing a human host, thus leading to the possibility of recessive genes leading to the purestrains being born. Nothing else makes sense GW... Ahem. 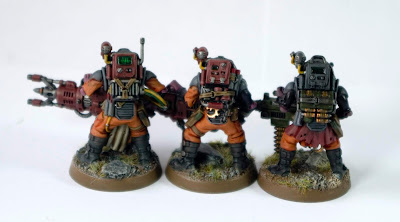 I want to pause here and take a moment to gush about the design work that's been done on these models. There'll be more of this in future episodes, I'm not sorry... Look at those backpacks, just look at 'em. They're made from lightweight tubular frames that equipment can be strapped to, the same frame supports both mining laser and seismic cannon. Even the heavy stubber is the same frame. Note to self: repaint that computer red, that was a bad idea leaving that grey. Now look at the mining laser pack, that's a spare battery and spare tips for the laser. So we know a story for how the weapon works, the focusing tips burn out frequently and need replacing. That's really good design work. Like I say, more unapologetic gushing in the future, count on it.

So how are they in game? Well, Charlie and I had a trial game recently with the new codex and what models we had between us and it was awesome. They play like nothing else in the 40k universe. Their rules make it feel like the battlefield is theirs, that your opponents are trespassing upon your turf. With psychic summoned reinforcements coming on from all over, rigging vehicles to blow when damaged and the like. They feel like a proper insurgent army, and the improvised nature of a lot of their weapons lean in to that impression. It's for that reason that I chose a Cult of the Four Armed Emperor as that enhances their existing character rather than making them weirdly and inexplicably better for no cost (looking at you Twisted Helix).

Those of you who can maths real good-like will have noted that there are 38 of these chaps which is, at best, a weird number to have. That's because there's another 12 neophytes on my painting station with which I'm doing something a liiiiittle different. But that's a story for another time. The next models you see from this army will be the acolytes. I promised myself that if I was a good boy and painted all my troop types I could have yummy character dessert so I have been churning through the bulk of the cult like a mad thing. 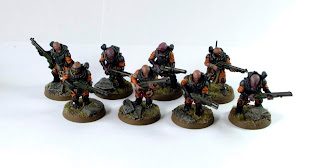 Now, one last thing, I've been saying "the cult" a lot. That's because I've not yet settled on the right name for these guys yet! Lots of the good ones are taken by questionable real world actors (no Shining Path, Golden Dawn, Heaven's Gate, see where I'm going here?). So I'm casting out to the internet. What would you call a Genestealer Cult? Answers on a postcard, then copy that postcard into the comments and tear up the postcard. Why do you even have a postcard? It's 2019 for heaven's sake.

Until next time lovely people...