By Maisey April 22, 2019
For my birthday this year I was a lucky boy indeed. I got given a 1/35 scale Churchill Tank. This was a pleasant surprise. I’m no stranger to building and painting armour. My history of Imperial Guard armies and Bolt Action will attest to this. However, I’ve never done anything in this scale, and damn she’s a big ol’ bucket. The Churchill was not a small tank by any means. It was designed with a First World War type of combat in mind. It was slow and heavily armoured to keep pace with, and support, infantry advances. It was also made very, very long to cross trenches and other obstacles. It turned out to be a very good base for special modifications including the ‘Hobart's Funnies’ and a whole range of bridging and engineering vehicles. It was also sometimes equipped with a flame thrower, so imagine the lovechild of the Hellhound and Leman Russ demolisher. You get the idea. 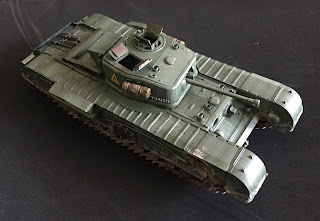 This kit is from Tamiya and their build quality is second to none. This kit basically fell together with no fit issues or gaps. There was a few mould lines and injection pin marks, but nothing too serious. I’m still scared of brass etch detailing kits so this one was built out of the box. 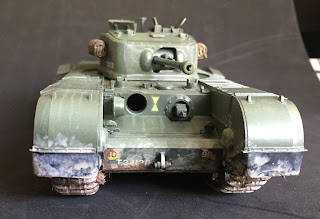 Painting was very straight forward. It’s green! Well it’s four shades of green, all from the Vallejo Air range. Started with a light grey primer. Then Green Black into the crevices. Then a coat of Bronze Green, making sure that the transition from the primer to the Black Green showed through giving us the shading. Then it was gentle highlights with Light Green first then First Light (which is also green). The tracks was simply airbrush steel, airbrushed Rust. Then a solid coat of Nuln Oil.

Weathering is where it gets really fun. You can do as much or as little as you like, the important thing is to do your research first. I spent a long time looking for Churchill’s in Europe and in colour. Then used these to reference where the dirt and grime mostly ends up. One thing that seems to be a bit different to my wargaming modelling is the lack of paint chipping, at least on the Churchills in service. It doesn’t seem to suffer the same wear and tear. 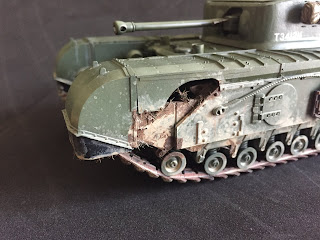 I used these materials for the weathering process. Not shown is the static grass that got mixed into the mud. 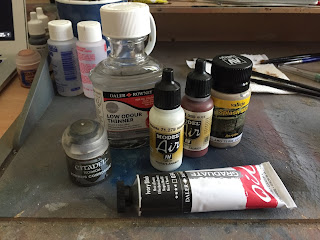 First step was to do the water and rust streaks. I felt they needed to be the ‘lowest’ layer of the weathering as mud would get splattered over the top of it. This was done using very, very, very watered down white paint. One can get specialised water streak weathering liquids but I don’t have that and I’m cheap. So I used white paint. Then a few rusty streaks as well, done with Rust paint. 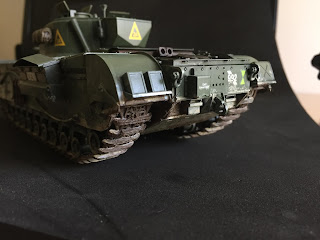 The dust was the next layer and this was mostly focused on the top half of the tank. This was done with dust coloured paint (I forget which now) thinned heavily with airbrush thinner rather than water as it dries a little differently and seems to pool better. Again one could use special weathering powders but as well as being cheap, I’m impatient and didn’t want to wait for them to be delivered. 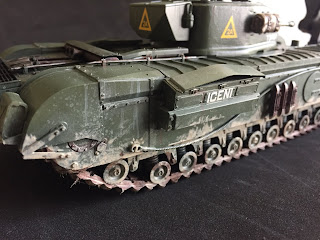 Mud. This was the really fun stage. Using Vallejo Light Brown Splash Mud in various stages of thinning to recreate various different types of dried mud and Citadel Typhus Corrosion for wet mud. The splash mud was heavily thinned to create a dirty wash over most of the lower hull running gear. Slightly thinned Splash Mud was then stippled on in patches on the top. Neat Splash Mud was also stippled and dabbed on and pushed into the crevices. Typhus Corrosion was then mixed into the deep recesses, letting it blend with the splash mud to create fresher patches that haven’t dried yet. Referencing the photos, grass/mud clumps seem to get caught up in various parts of the running gear. To recreate this I mixed static grass into the Typhus/Splash blend that was still wet on the palate until it was a sticky mess. Normally getting static grass into your paint mix is a bit of a disaster, but here I invited the disaster. I think it worked pretty well once I had scooped into the appropriate places. Finally I used an older brush to flick paint at the model to give that fine splatter effect. I think I got more on me than I did on the tank, but oh well, I wash. To finish up, I dug out the oil paints to do some sooty/oily washes and stains on the engine deck. 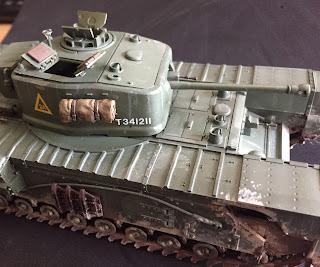 Overall I’m pretty happy with my first large scale model. The build was smooth, the painting was neat, and the weathering was fun as always. The kit did actually come with some figures, and inspired by Mark’s previous post I’m planning on building a little diorama for the tank. I’m not planning on doing many large scale models like this so I’m going to put the effort into doing them properly.