By Charlie April 15, 2019
After a few games of Kill Team, I decided that life would be a lot quicker and easier if I had all the information I needed for my team on one piece of paper. All their weapons, stat lines, specialisms, tactics, faction special rules, everything.

Turns out it's very doable.

In today's post, I'm going to share the template document along with my own custom sheets for you to download and alter to suit your team. It's relatively basic - just a Word document - but hopefully it'll be of some use. It's certainly sped up my playing speed, as I haven't played this game enough to just remember everything. I'll also include pictures of my three Kill Teams, with a brief overview of their background.

Before I dive in, I must give thanks to Jeff. Whilst we were preparing to run a Kill Team campaign (sadly put off due to scheduling conflicts) he made a Word document formatted to replicate 6 of the generic team member cards you get in the game. It was this original template that I adapted to make my summary sheets.


Limitations
The only major downside with these summary sheets is of course that if you're playing a campaign and are expanding your command roster, it's a lot more rigid compared to having an individual cards for each fighter.

This blog serves as a testament to my enthusiasm for the Deathwatch, given the number of articles I've written about them. They're also the classic kill team (beyond perhaps some grizzled Imperial Guard veterans) so obviously I had to use them in this game, particularly given how long I spent painting them.


Background
Each of the members of this team have their own stories, but the leader, Elias, has been a longstanding character of mine for... ye gods... well over a decade. This is arguably way more backstory than is suitable for this post, so skip this italicised section if you're not into that sort of thing.

He was eventually invited back to the renamed, penitent and fleet-based Templars Errant by a Chapter Master who had since seen the error of his ways, but Elias had no interest in rejoining his brothers, fearing that his return might re-open old wounds the chapter needs to forget.

When Inquisitor Aerdon finally died, Elias continued to work with one of his proteges, Inquisitor Drake. Their work took them all the way from the Eastern Fringe to the Achernar Sector, but over time Elias found that Drake's approach - subtler and stealthier than Aerdon's - left him with few opportunities to get involved. Whilst the time he spent with Drake broadened his mind (perhaps more than is safe for an astartes) he eventually decided it would be best to return to something he had known over a century before: the Deathwatch.

Among his brother-marines in the Deathwatch, Elias is sometimes jokingly referred to as "the tealshield," in that he is a blackshield in all but name, refusing to discuss his past lest it provoke disagreement. After spending so much time among the inquiring minds of the Inquisition, Elias finds the company of hypno-indoctrinated astartes wearying. He keeps this to himself. From their perspective he is curt, and has little patience for any traditions he views as a waste of time or that revere the Emperor as a god. That said, he encourages the marines in his team to challenge his orders when they can see a better way forward, and does everything he can to safeguard them in particular, and Imperial citizens in general.

Narratively linked to Elias is this team of Stohlbard Dragoons (effectively Tempestus Scions Inquisition Storm Troopers). These guys are the shipboard marines of Inquisitor Drake's ship, the Trojan, on which Elias lived for years. The people of Stohlbard are famed in the southeastern fringe of the galaxy for being psychologically resistant to the influence of Chaos, though whether this is purely a byproduct of their culture or indicative of some mild abhuman trait is a subject of debate among the magos biologis of the Mechanicum.

A point of some irritation to some Imperial servants is that the people of Stohlbard greet everything, even the things they care about deeply, with humour. This is taken as a sign that they do not treat situations with the gravity it deserves, although Inquisitor Drake holds that it allows them to endure things that more rigid, pompous minds might struggle with.

Third Team: The Kabal of the Obsidian Rose 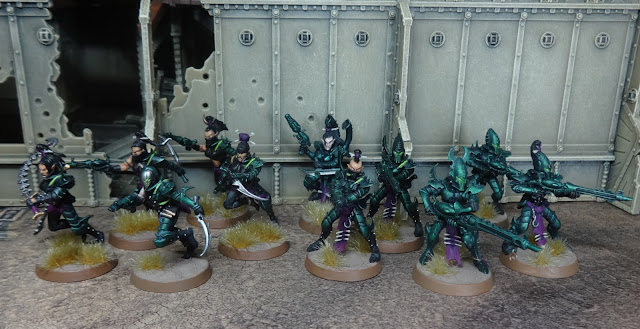 Khatryx the Pale might have the wit and guile to rise through the strata of Drukhari society, but she's far too busy enjoying herself. Where some might treat a realspace raid as something to be done quickly, grabbing as many slaves as possible before returning to Commorragh, Khatryx likes to meddle with colonies, sometimes for months, only returning to the Dark City when supplies are dangerously low. There she'll sell enough slaves to pay for a few weeks of revelry before plotting her next excursion.

Her lack of political ambition means that very few Drukhari have any interest in following her, but those that do are very much on her wavelength, and see her leadership as an opportunity to embrace life's thrills to the fullest.

And so there we are. If you choose to adapt these, I wish you good luck. We all know how much MS Word likes to explode when handling complex formatting...