By Jeff April 08, 2019
From the depths of the Sejanus underhive come the first of many Necromunda gangs. I won the painting race! [editors note, this surprises no-one]. I love all of the Necromunda gang designs, choosing one was a hell of a task. But there is something about the Orlocks, their down to earth approach, the biker gang stylings, the low-tech weapons. Thus my first gang just had to be the House of Iron:

The backstory for this band of ne'er-do-wells is that they are a legit Sons of Anarchy style biker gang holding territory for protection and doing some light gun-running and convoy-raiding on the side. Their legitimate front is the "Blood & Chrome Social Club" a dive bar attached to a mechanic's (see? Very Sons) from which the gang takes its name and launders the proceeds of its illegal activities. The Blood & Chrome relates to the bonds of blood "we're all family" and the chrome of the bikes. Those blood red loincloths are the mark by which the initiated members of the gang are marked. New members, juves and pledges wear undyed loincloths until they've proven themselves.

Heinrick "Steelfist" Eisen leads the Blood & Chrome. He might seem young compared to some of the others but by gods has he proven himself. During a raid on a caravan he had his arm torn off at the shoulder by a harpoon launcher accident. Not only did he continue the fight - cauterising his wound on the hot engine manifold of the truck they were attacking - but he also demanded the installation of a servitor prosthetic rather than waiting for a graft or a more sophisticated prosthetic. Better to accept crude than to sit out the gang war going on. This understandably drew the attention of the rest of the gang and when the former leader "Uncle" Harry Haearn died the election went to Eisen unanamously.

Eisen was the last miniature I painted for the gang. I wanted to get the look of the gang sorted before I embarked on it's "face". He's dressed in the black leather cut of the Blood & Chrome and the only red garment in the gang. I wanted him to be maximum "blood" in his colour scheme. The servo arm is clearly the star of his show. Chipped and scarred paintwork with the very Necromunda hazard stripes all over it and a lot of brown ink for an oily vibe. 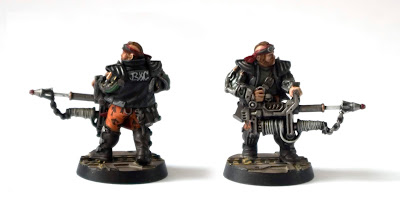 Our first champion is Janis Dzelzs. Janis is the Blood & Chrome's harpooner, on convoy raids he rides the pickup and is the one that spears the target truck and thus provides a stable platform for juves to scramble onto it. He is a big bear of a man with a genial vibe that pairs well with hanging around the the new guys. Recently he got pinched by the Magistratum and had to be rescued from the chain gangs. He's not got around to getting new trousers yet.

Dear lord I love that harpoon launcher. Just look at it, there's a worm gear to slow down and torque up the winding engine, there's a chain drive winding the drum. The line is properly stowed on the conical clean release. It's gorgeous. The whole trousers thing was a total whim, I just fancied doing some bright pants and then thought of throwing some Orange is the New Black vibes in the gang for that criminal cred. 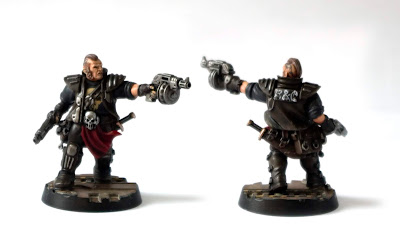 The second champion is Garrick "Grizzly" Yster. "Grizzly" is the sturdy, right arm to Heinrick. Blazing shells from his twin pistols, Yster has a reputation for gleeful, intense violence. He makes an effective sergeant at arms and shows no signs of wanting to lead himself. Yet.

Garrick needed some details to lift him from the rest of the gang. I wanted him to be a champion to end up with the ability to shoot both dem gunz. So cue a Punisher-style skull on his shirt and some head tattoos to mark him out as a cut above. Love the facial hair on "Grizzly". 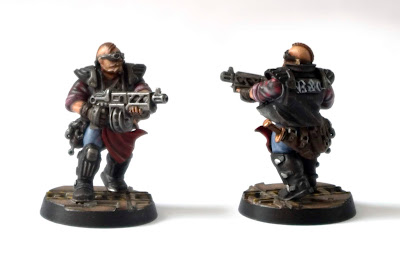 Ganger Fridrik Zeljezo, part of the autogun fire-support team and wearer of fine lumberjack shirts. The gangers aren't getting a huge amount of backstory. Their stories will be told on the field.

Zeljezo was the first model I painted for the Blood & Chrome so was the test bed for the scheme. I liked the idea of unifying the gang only by the black "cut" with the "B&C" mark on the back and their red loincloths. The rest of the model could then be as individual as I liked thus creating a lot of character and variation and looking as far from soldiers as I can get. Some gangs reward uniformity, Van Saar for instance, Orlocks look best - in my opinion - when they are a bit less uniform. 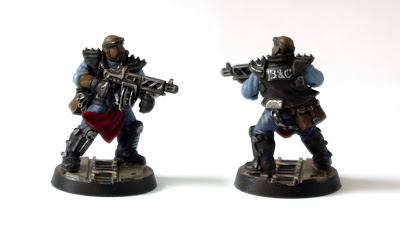 Second in the autogun parade is Simon "8-ball" Planchar. Clearly nicknamed for his baldness, only blooded gang members can get away with calling him it.

8-Ball was a conscious choice to get some skin tone variety into the Blood & Chrome. The sculpting seemed to be a little less Caucasian so I could get away with changing it up. I'll do a skin tones post one day but my range runs from Burnt Umber, up through Beige Brown, into the GW flesh tones. From these, with different wash options, near enough any skin colour can be achieved. 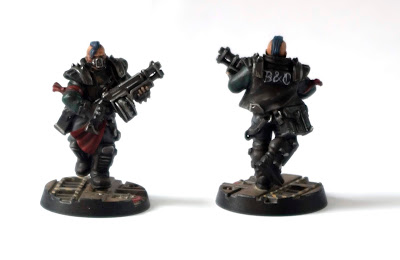 First in the "up-close-and-personal" brigade is Patrik Iarann with his combat shotgun. Patrik is more of a raver than most of the B&C who tend to be a metal crowd.

I have no idea why I went for the blue hair, it just seemed to fit! It's tough to see on the shirt but there is a subtle black check on the green. 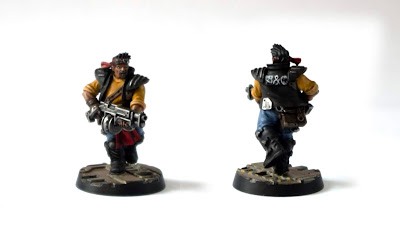 Backing up Patrik is Hektor Sidero. Much like Patrik, Hektor revels in the close-range, fast twitch environment that shotguns excel in.

Hektor was an unexpected addition to the racial profile of the gang. While I was working on him I noticed that the sculpting could work as more of a Latino flavour. For this we start at Beige Brown and work up into the Caucasian flesh tones. 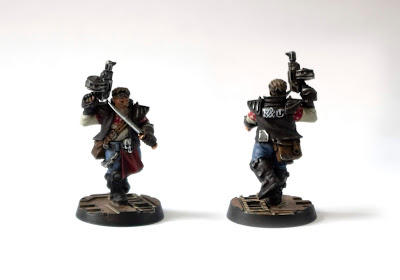 Then we come to "Grizzly" Yster's support crew, starting with "Dapper" Pierre LeFer. Something of a dandy, Pierre comes in for gentle ribbing from the rest of the gang. Anyone outside the gang will find themselves looking at the business end of his knife if they try it.

Pierre is another one that I wasn't sure what happened to my brain while painting him. Anyone with that facial hair needed to be a dandy. I went for a pale toned top on him that needed... something. Before I knew it he was wearing a Nordic-style jumper. It shouldn't work, it really shouldn't, but it does... 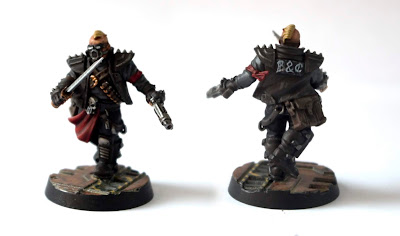 And finally, also in the "stab 'em and scarper" squad is Aleksi Yerkat. Yerkat does any casing of targets the gang needs. Thus he prefers to go masked when in Colours.  Means he's less likely to be recognised.

Aleksi is one of the few that you can get a clear view of one of the other gang recognition signals in the painting. The black jacket and blood red loincloth for sure, but I wanted a chrome element too. That came in with the skull belt buckles they all have. So very polished silver coming up! 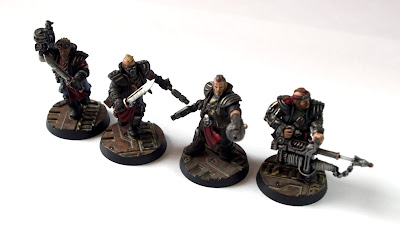 Handily, the Necomunda plastics come with rather lovely bases that make it fairly straightforward to get them finished off. In this case just stippled layers of rust colours over black-washed metal, the obligatory hazard stripes and a couple of layers of very very thinned down baneblade brown for dust and dirt.

Obviously this is not all the gang will be, but it's all I could afford in the initial gang creds. You'll notice no juves yet, not sure if that's a mistake or not but we shall see! Looking forward to everyone being ready to launch into the campaign. Now it's on to paint some scenery for it!