Book Review: A World of Dioramas (Per Olav Lund)

By Assistant Kogz April 01, 2019
I’m in the middle of a couple of different projects at the moment and I thought it’d be nice to post something a little different, so here’s a book review.

In truth, this isn’t very topical as the book came out in about 2014. However, as we cater mostly to the Games Workshop community rather than the scale modelling community, I thought It’d be a nice opportunity to introduce the book to a wider audience. 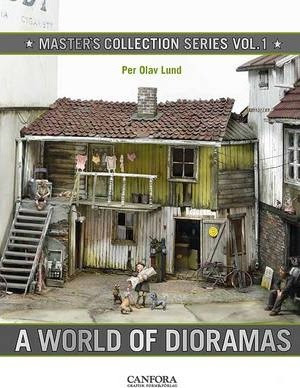 I have taken a couple of photos from the book for the purposes of illustration, both the Amazon and Canfora website fail to show any of the interior of the book, which is a shame as there’s so much more than just the cover. There is probably a good way to take photos of books - I have yet to find it, so bear with some of the photography.

I picked this book up at Salute a couple of years ago and here’s what I think of it.

Per Olav Lund is a Norwegian scale model maker who specialises in dioramas. like many, he takes significant inspiration from World War 2, but he also takes time to do post-war pieces as well in a style unrelated to conflict.

Firstly, Lund’s model making is exquisite, the scenes are beautifully detailed, beautifully painted and coloured just right to convey that cold, diffuse light that you get in Northern Europe. The first part of the book includes a short introduction to himself, before he starts talking about some of the techniques he used when making the diorama that forms the front cover of his book.

Rather than focus on the step by step construction of how he went through the building of the scene, he highlights certain bits that he finds interesting and explains how he does just those bits. These can include smashed windows, textured concrete (a bugbear of mine), woodwork, and later, brickwork, rust and violent seas.

What stands out for me is how he manages to convey different textures and the sense of age so well with his model making, and I think this is truest in this first, very domestic scene. 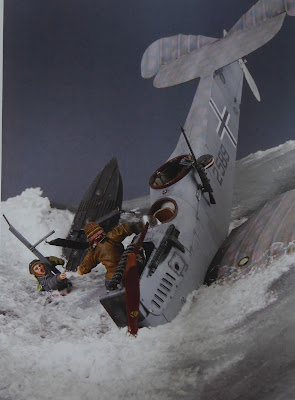 Drama is not absent in his work, a later scene shows the struggle of a crew who are escaping from a beautifully painted wood framed monoplane that has ditched into the North sea. Again, he goes through some of the constructional detail of how he assembled and painted the piece, but leaves the donkey work for the reader to figure out.

I’ll include a few more scenes from the book, one is a somewhat ambiguous ‘peace in war’ scene and the other is a post war diorama depicting a quiet scene of suburban life.

There is more, particularly for the military modelers, but I’ve excluded these in favour of the peace time scenes that seem rarer and somehow more special for it. 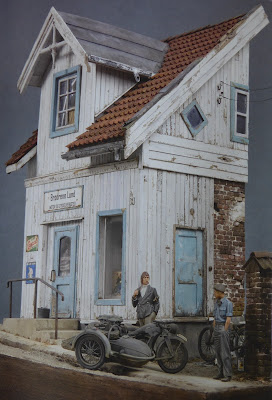 The dioramas in this book are (more or less) beautiful and you’ll find yourself coming back to the same pages again and again, just to look for more detail or to try to work out how something was done.

In that respect, the book is inspirational and it’s a lovely thing to come look through at the end of a day of hard hobbying. It's also nice that Lund uses paints, equipment and materials from all sorts of different suppliers, and isn’t tied into one brand, meaning that you get a better idea of what's out there.

However, it isn’t a recipe book, it does assume a certain level of skill or technique is in place already and aims to show what you can do over and above the basics.

So, would I recommend this book?

Yes, I think its excellent and it’s currently on Amazon for the not very princely sum of £16.