The Tale of Sweary Bozz 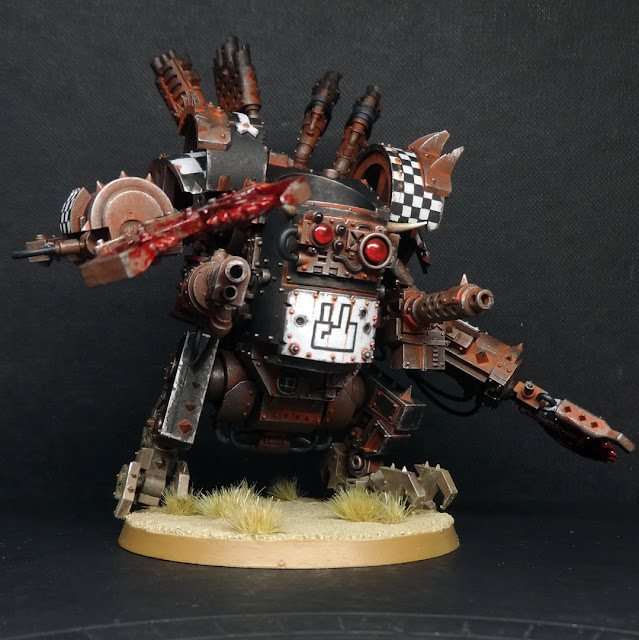 Sweary Bozz did a lot with tone of voice; it helped compensate for the limited vocabulary. It wasn't that he didn't understand other ork words, it's just that he found he could express himself perfectly well by saying 'zog' and just sprinkling the feelings on top. He could, for added flavour, add the word 'off' on the end. For anything else, there was 'bog' and occasionally 'git.'
'Bozz, did you know Metal Orker is playing tonight?' one of his mates would say.
'Zog off!' Bozz would answer, a surprised grin spreading across his face.
'Can you get us tickets? I know you and Sirrus Bizniz go way back.'
'Zog off,' Bozz spat, realising he was being used, and discouraging said cynicism with a crisp headbutt.
Lacking Sirrus' aptitude for articulating what was just so very metal about this band or that band, Bozz never had much influence of his own, but Sirrus recognised a fellow superfan. Bozz went to just as many gigs, and wasn't bothered about talking about it afterwards. He just turned up, dove into the most brutal mosh pit, and emerged with bruises, missing teef, and a big grin.
When Sirrus began his offworld tour, Sweary Bozz was one of many boyz who followed him. Unfortunately, this resulted in him being in the firing line when a bunch of lads got mown down, just absolutely mown down, by some cheeky bloody knife-ear teleporting panzies with a hot wire guns.*
*Now that I've started playing games with this army, the lore of my units will reference things that have happened in game. In this case, Harvey's warp spiders ruining my shit in stunning fashion.
Whilst Sirrus was miffed about the overall slaughter of his boyz, he did have to concede that you can't argue with guns that killy. Or at least, he conceded it after he tried himself and got badly battered for his efforts. After the panzies had left, he found Sweary Bozz, or at least the upper third of Sweary Bozz. He was still conscious, and as Sirrus looked down on his fellow metalhead, Bozz did his first proper sentence.
'If I dies, wot if I doesn't come back somewhere dere's proper musik?'
Sirrus wasn't about to take that lying down. He carried the pulpy ruin of Sweary Bozz to his best mek, Krom Bignooz, and summoned Doc Snippy da Snip for good measure. He explained the price of failure, and he left them to their work.
Two days later, a mechanically amplified deluge of delighted curses and laughter boomed out from Bignooz' camp. The Metalwaaagh's first deff dread had been created, and just so everyone knew who was inside it, Bignooz had his grot orderlies paint a big ZOG OFF glyph on the belly plate. 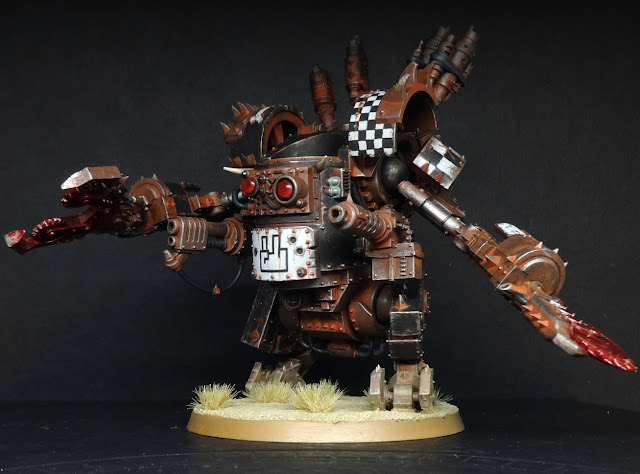 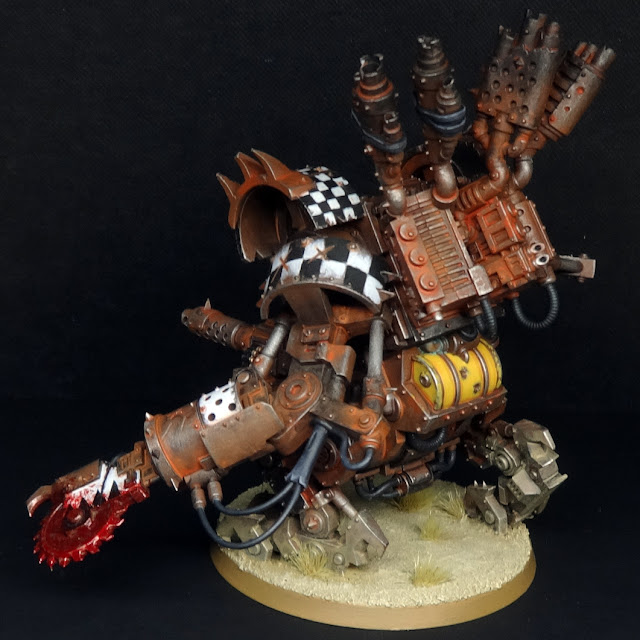 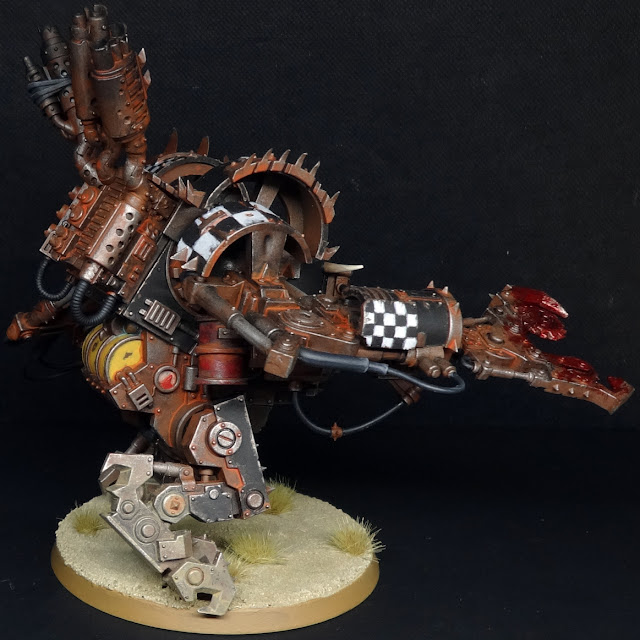 It just so happened Squig Destroyer were playing a set that night, and of course Sweary Bozz attended. He headed for the biggest mosh pit... which promptly evaporated as lads fled in every direction. He learned there was a horrifying cost to his new mechanical bulk: with great power, comes great stompability. The lads all understood his disappointment, but it didn't mean any of them were about to invite a stray elbow from what they were now calling Mosh Deff.
Sweary Bozz would always love the kultur and the music, but the gestalt joy that came with diving into da pit with other lads was lost to him.
That is, until Doc Feelgood heard what was going on. Leaking herbal fumes from every viewport, the three members of Grötley Crüe clanked into the crowd and jostled up against Bozz, who laughed, and swore, and jostled right back. All the fleshy lads gave them a wide berth.
Watching from near the back of the crowd, Sirrus Bizniz nodded along to the music in satisfaction.
+ + +
The painting of Sweary Bozz/Mosh Deff follows the same methods outlined here. Next time, I'll be expanding the kans, with a mob of stormboyz hopefully hot on their heels.