The Buddha said that all life is suffering, and let me tell you, one thing about painting a [CENSORED] Empire army is that [EVEN MORE CENSORED].

No, I love ’em really. I’m doing a thirty-stage paint scheme for six-point models, so I must do. Either that or I’m a masochist.*

Some may wonder: why am I painting a new Empire army, when I already have this one?

Two reasons. One: you can never have enough silly moustaches in your display cabinet. Two: because about three months ago, my friend John bounced up to me with the sort of childish glee that only a burly, six-foot Kung Fu teacher can, and asked if I’d team up with him to take part in GW Oxford’s doubles tournament on 7th February. Each entrant was allowed to use the contents of any one Warhammer Battalion box. I swear I spent at least three seconds contemplating the purchase of a battalion box with the attribute ‘not Empire’.

The Hochlanders in this battalion will form the basis of the army I’ll be painting up for the Beard Bunker’s campaign, but thanks to my deadline of February 7th, I need to paint the first 800 points rather sooner than everyone else.

With only a week and a half to go before the tournament, and having started two months ago, my plan was to have everything bar the knights done at this point. A fairly reasonable goal, I felt. Forty state troops. Two months. Very doable.

Now, because I’m the man, I have thus far produced fifteen state troops.

[Insert embarrassed cough here.] Yeah, this is going to be a busy week.

However, to prove that I’m not a total failure, I thought I’d include a picture of the newly painted handgunners on a pretty little movement tray. 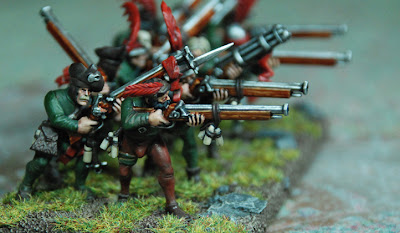 The movement tray is just one of the pre-made ones GW sell, as opposed to a modular one. I’ve turned it around and filled in the bit that used to be the extra space at the back with sprue. Not only does this prevent them from sliding out of their tray when placed on hills (my Middenheim handgunners just look at me accusingly when I ask them to walk up hills, and then stage a lie-down protest), but it also means that there’s a bit of a scenic buffer between them and enemy units, so if and when they get charged, their handgun barrels aren’t going to get in the way of enemy models.

The rag-tag uniforms and well-maintained handguns were in no way inspired by Bernard Cornwell’s portrayal of a certain regiment of riflemen in the Napoleonic Wars. 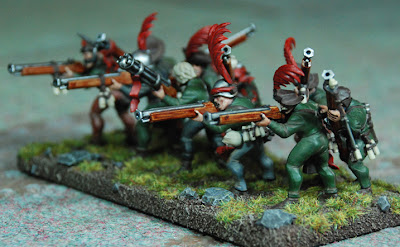 Fortunately, the scheme also ties into Hochland nicely; its people are famed for the craftsmanship of their blackpowder weapons, despite it being a relatively rural province.

The length and colour of the sergeant’s hair also has nothing to do with a pugilistic Yorkshire-born officer of the 95th. Nothing whatsoever. 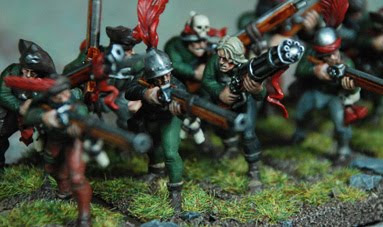 I sincerely hope I'll be posting soon, telling you all about the 700 points of Empire I painted in a week.

There may be other people (people called ‘Jen’, for instance) who’ll be thinking fat chance right about now, and not without precedent. Pff, whatever... it’ll be fiiiiiine....

*Those two options are so not mutually exclusive.