By Jeff January 10, 2012
Greetings all, I have been musing about the units in my army and how they relate to one another. From this I have built the backstory of my Nurgle host. Essentially it breaks the army down into two parts, a cultist host and a classic Northern wastes warrior contingent. The (slightly icky) backstory is as follows: There were two elements of the plague ridden army that choked the Old World that year, the worshippers of the Flylord and the elite followers of a Nurgle Warlord Gyles Pestilens. The Flylord was the many blessed former Sigmarite priest in Averland who saw the truth of Nurgle during an outbreak of the red pox. He had lost faith in Sigmar's power when first the Orc raiders had swept across the region and then the plague followed. He began to preach not the mercy of the hammer and the two-tailed comet but instead the acceptance of fate and the tolerance of the afflicted. His words and the passing of the plague from the region swayed the people and a plague cult began to grow. In reward for leading the population of his town into the worship of Nurgle he was favoured with mutation and a powerful persuasive presence manifesting as a literal - corroded - silver tongue. He has been leading a cult of the Plague God gathering worshippers and the services of a potent sorcerer with the gift of plague, Lothar Pneumophilus. His persuasive tongue grew the cult rapidly and in his ambition he started a crusade of his followers north hoping to gain access to the Chaos Wastes and find an altar of Nurgle to swear fealty to his god in person. Unfortunately for Pestis, the freezing cold of Kislev tore a swathe through his ragged crusaders and the difficulty with spreading Nurgle’s unholy touch in the cold environs weakened his power. It was in this frozen wasteland that the Ragged Crusade came upon the warband of Gyles Pestilens, former Bretonnian Duke now swollen and rank beyond recognition. 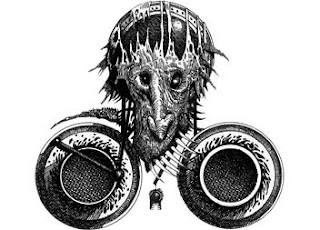 Gyles had been the Duke of Montfort, a powerful man and responsible for the borders with the Empire and the Wasteland. All was well until his eldest daughter succumbed to a painful wasting illness, at the funeral, as his wife wept at the coffin he noticed the start of stigmata upon her neck. To his horror more and more of his family and retainers fell to the contagion until he was almost alone amongst the cries and moans of the horribly afflicted. Desperation drove Gyles to rage and he marched to the chapel of the lady with his five closest knights and loudly denounced his goddess. The men attacked the chapel, destroying relics and shattering devotional windows. Wild with grief and fear the men revelled in their desecration, smearing their excrement and blood upon the walls and defiling the pool of the lady with their fluids. Eventually, weak from their exertions and the blood that they had drawn they collapsed into a fitful sleep. Amongst the filth and defilement Gyles’ dreaming mind was visited by a spoor of Nurgle’s unholy will. It promised salvation in exchange for service and sacrifice.

In the morning the knights barred the chapel door and declared it the personal chapel of the Duke and his inner circle. They held a watch upon the portal and refused entry to all. Only when the Duke came to worship bearing relic chests and offerings did the six men withdraw within the chapel. The fevers broke and promised salvation was achieved. For a long time no-one thought anything odd, the Lady had answered the Duke’s prayers and the disease had passed as all pandemics do. However, the private worship still continued. Disappearances of serving staff and men at arms increased. Rats infested the dukedom and mild agues and colds became commonplace. Gyles became distant from all but his inner circle and ever looked drawn and pale. Eventually a curious squire climbed to one of the shuttered windows of the chapel and prised one open a crack. His scream and subsequent fall, vomiting and fouling himself, to the courtyard brought the populace out and finally up in arms. They battered the door to the chapel until it burst and finally the truth of the dukedom was revealed.

Within was a scene of incomparable horror. Excrement and filth caked the walls, distressing runes carved into its smeared surface. Decomposing human eyeballs were embedded within the mess and crude faces drawn around them. To the distress of the watching villagers the faces animated and chuckled as their rotting eyes turned to regard the interlopers. Clad in their panoply of war, the Duke and his Knights stood around the stagnant, stinking pool that was once the holy water of the lady. This pool was now an ungodly stew pot with the dismembered remains of the missing servants and men at arms floating and rotting within. Most damming of all, two of the men held the arms of the Duke’s youngest son and suspended him, screaming over the pool as his father unwound his viscera on a rusting hook and added it to the foul broth.

Fury overwhelmed the people and they fell upon their former master with their bare hands. Sadly, there was no way for unarmed peasants to prevail against fully armoured knights and the Duke and his men cut a swathe through his former people. A fell light was upon them and the slaughter seemed to energise rather than exhaust the knights. Eventually they fought their way to the stables and took to their steeds. The six men turned their backs on Montfort and rode North through the wasteland. Their path was typical of new forged followers of chaos and before long through proving their strength at arms Gyles, now the self-styled Duke of Morbidity, had a small war band following him. His knights and their steeds warped and changed with each victory until they were barely recognisable as their former selves. Now deep within the wastes Gyles happened upon one of the disgusting offal strewn altars to Nurgle and pledged his soul and sword eternally to the god of plague.

Gyles rode south with his warriors but Nurgle’s gaze was now fixed upon him and through the blessing of his attention Gyles changed. His flesh swelled and overflowed over his warped plate. He grew corpulent beyond belief and soon shattered his steed’s spine under his terrible weight. His followers built for him a palanquin to ride upon and henceforth Gyles travelled in rotting splendour. His arm’s lost their dexterity and took on a monstrous strength. Forsaking his ancestral blade he took to using a mighty axe taken from a defeated champion. That champion now brain damaged and simple from his injuries carried Gyles’ personal standard. It was in this march south that The Duke of Morbidity met the Flylord. 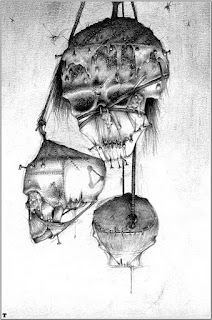 Parlaying under truce the Flylord realised that his power meant nothing in comparison to the might of the Duke’s men. His persuasive power and ragged band of mortals would be destroyed utterly within the wastes if these men were typical of its inhabitants. Instead he resolved to seek Nurgle’s continued blessing the way he had always received it. The Flylord declared himself a priest of Nurgle and persuaded the Duke to permit his followers to march with him south. Convinced that the Grandfather himself had guided the Flylord’s followers to him Gyles agreed. Together they turned their attention southward and marched on an unsuspecting world.

The pair realised that the surface world held many mortal dangers between their current course and the rich prizes to be had within the verdant lands of the Empire. Both sought a way to circumvent this danger and deliver their blessed mission to the heart of the human world. In visions Nurgle guided them to the disguised entrance to the Skaven Underway and the army marched within. Soon they were challenged by the Skaven guardians of the Underway. The Flylord’s tarnished silver tongue came into its own again and he persuaded the warlord that they were emissaries of the Horned Rat in his guise as the Lord of all Plagues. This was enthusiastically accepted by the local priests of Clan Pestilens and it was therefore politically expedient for the warlord to grant them passage. The plague monks had fallen under the spell of the Flylord and showered the Duke of Morbidity with gifts including their very name. The newly titled Gyles Pestilens, Duke of Morbidity presented one of their gifts – a blind, hobbled stegadon captured by the Plague Monks in Lustria and originally intended as a present for Clan Moulder – to the Flylord in recognition of his efforts. The Flylord converted the beast into a walking devotional altar of Nurgle and continued the worship of the Grandfather in the style of the Duke. The Flylord’s plague cart was claimed by his followers and continues to rumble in their midst. So armed and permitted, the Pestilent Host marched beneath the bones of the world upon an unsuspecting people…

So there you go, kinda ties mine and Lucy's armies together thematically, gives me a nifty conversion idea for the Marauder horde unit and introduces the premise and character of the major players. Oh, what was the nifty idea for a marauder horde? Essentially make the Ragged Crusade. A mix of Flagellants, Battle Pilgrims, Beastmen and Plague Monks to create a truly eclectic unit. At the centre of the unit a converted Vampire Counts Corpse Cart being the focus of their motley group. Essentially it will take the place of 8 figures in the ranks of the unit and will therefore be modelled with at least eight figures on the base so as not to be confusing. I'm figuring, the Necromancer with the long corpse-pole will work for one, have 4-5 crusaders pulling the cart (mix of flagellents, plague monks and a beastman or so) and a couple of guys helping turn the wheels through the snowy mud. Cool huh?

I should have my first WIP post up on Chaos stuff as I have been attacking 5 chaos warrior models with a dremel to give them a pitted, corroded aspect to their armour.