How I avoid hobby burnout

By Charlie January 09, 2012
Many hobbyists imagine creating an army this big...

...and end up creating this instead: 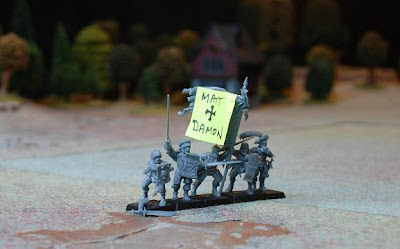 If you just had a twinge of recognition, I feel your pain. Or rather, twenty-one unpainted Dark Eldar models and three discarded Tyranid Warriors (amongst many others) feel your pain.

New projects: they're great, unless you have too many of them. I can get excited about many many things, if I let myself get carried away. I’ll have what some call ‘Hobby Butterfly’ syndrome, and develop Sprue Blindness (when you have so many unassembled models populating your house that you can no longer decide where to begin). Clearly, this is unacceptable. There must be control. CONTROL!

Control is good, unless you assert too much of it. I can do an amazing job of making solemn promises of army monogamy. Quoth the army selection techpriest, “Do you, Charlie, take this Space Marine army to be your rules-compliant list? To have and to hold, ‘till death do it sunder on turn three or thereabouts?”

There’ll be a honeymoon. I’ll stare enthusiastically at the little blighters just long enough to get one squad painted up, when some other project, winking at me alluringly and promising untold excitement begins to tempt me away. “No!” I say, with desperate fervour. “I’m saving all my love for that there Space Marine army.” That’s fine if it works, but if I’ve now lost the buzz for the Space Marines whilst successfully clinging on to my hobby monogamy, I’ll simply stop doing anything hobby related at all. For shame, for shame! [By the way, try saying ‘hobby monogamy’ out loud, it’s great.]

What does all this mean? It means, give yourself some limits in the number and ambitiousness of your projects, but not to the point where things stop being fun. Obviously, it’s a limit which will be different for everyone. For me, I find I’m usually quite happy with two concurrent army projects and one scenery project. That way, at any one time, I’ve got three things to do. If one of them starts to feel like an obligation, then I’ll stop, because the hobby is meant to be fun! Instead, I’ll work on one of the other two projects, which will now taste that much better for having the sweet, sweet tang of procrastination... and polygamy.