Selecting an army, the Jeff way

By Jeff January 05, 2012
Once we had decided on Warhammer as our campaign I had to select an army. I always go about this the same way. First, I grab a list of all the armies to remind me of all my options: 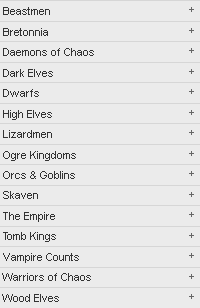 I then go through and eliminate all the options that I have either done recently or am simply not excited by: 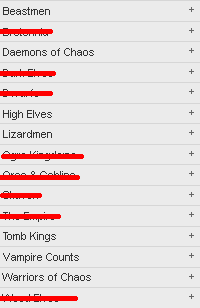 Now each army needs to be thought about in more detail. I have a look through the model range, imagine colour schemes and see which ones light my fire mentally. With that done the list looks more like this: 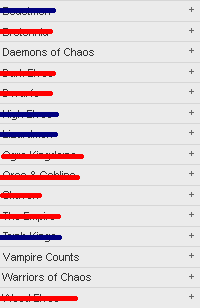 I was left with a choice of Vampire Counts, Daemons or Warriors of Chaos. I eliminated Vampires early on as the idea of the campaign for me was that it was going to be a wholly new army. I had already started painting my vamps and had put them aside to wait for the rumoured new book (now confirmed of course). I was therefore left with Daemons or Warriors. I love the idea of Daemons, have even thought of doing the 40k crossover idea using some Litko round base movement trays to facilitate the project. The Warriors though were calling me, I had done a Slaanesh themed army about eight years ago and had some ideas I had not yet used.

The next phase in selection for me is to take a look at the army list for the choices. Notice that this is the first time I have mentioned rules at all. The look and feel of an army is all important for me. I will struggle to paint an army if the models do not excite me regardless of how nifty their rules are. While I was reading the Warriors list I kept on looking at the Nurgle stuff, something about it was calling to me. My choice was made. I then embarked on writing a list for the army and musing on model selection as I went. This is the result:

I knew I wanted Knights, I knew I wanted a Palanquin mounted lord and I had had a mad idea for a warshrine mounted on a Stegadon. With those choices taken care of I needed to round out the army. A couple of units of warriors 14 strong to fit a character and be 3x5 was a decent start. Knowing that the magic of Nurgle is hideous I threw in a sorcerer (with a potion of strength as a nasty surprise for challenging characters). I was starting to realise that I would have precious few units in the army so any of them running would be a disaster. With this in mind I added a Hero with a Battle Standard to keep the army together when the going gets rough. I was musing about adding another unit of warriors but the look of the army in my head was starting to appear monotonous. Plus there wasn't any real "soak" unit that I could throw at something to keep it busy. To fill this role I decided on the awesome visual appeal and savage combat chops of an entire horde of Marauders. 50 of these guys makes a horrible challenge. With three out of the five ranks capable of fighting in combat that is a potential 31 attacks just from the regular guys and the champion. Given that the mark of Nurgle drops your opponants WS by 1 they are likely to be hitting on three's as well. Armed with hand weapon and shield means that they have that parry ward save and look the business too.

Something I tend to do is take an army list on to the next level to see what I can do to expand the army in the case of rampant enthusiasm. I figured that using the lances from the knights (seriously, does anyone take lances?) as halberds would look great so some Chosen were thrown in, I liked the idea of making a snail chariot so that was in too. Finally there was space for one more unit of Warriors and that was it! I often find that the difference between a 2000 point army and a 3000 point one is not an awful lot of models. Finally I start to plan the order of painting for the army. This begins by making a 1000 point list out of the 2000 point army as follows:

Make sure you only use models from the 2k list. You don't want to have to buy more models just to make a smaller army. I can now see that the priority paint jobs are warriors, knights and a sorcerer. This means that I can restrain myself from the parts of the army that are really exciting me (palanquin, marauder horde, warshrine) until the workaday parts of the army are finished. As though Warriors and Knights of Chaos can be called "workaday"... While I was writing the lists I was musing as to the story line of the army, that helps to inform painting choices but will have to be a story for another time.