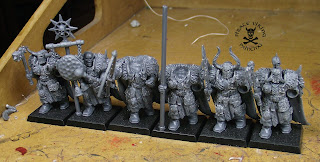 The first thing that should strike you is that the armour looks a bit, um, ragged. This is for a reason, I want these guys in corroded armour and by attacking them with a dremel for a while I create texture for the Jeffrust to work with. The second thing might be the lack of a banner, shields or a couple of heads. The first element is just to make it easier to paint the standard bearer. The solid plastic banner is a big ol' slice of win but it is somewhat large and gets in the way of the brushwork. The same problem informs the leaving of the shields until later. The lack of heads is because I am eagerly awaiting a parcel from a Polish company by the name of Puppetswar. This will contain some suitably gribbly-wibbly heads to adorn five out of 14 models in each of the units. Should provide some icky character. 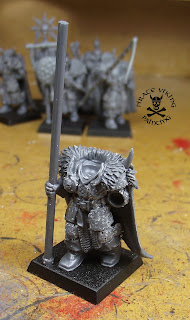 With the banner bearer being so sparse I figured you could get a look at the pitting on the armour. A great deal of additional texture will be provided by the Jeffrust painting (an example of which can be seen below) 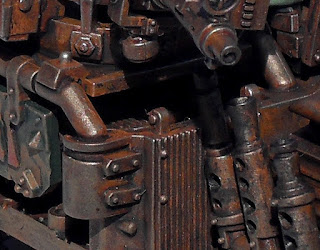 but the pitting will really raise the game to the level of "how the hell is that holding together?". The pitting was achieved by attacking the piece with a sharply pointed grinding tool in my (cheap knock-off) dremel. Vary the depths and put in some bigger holes. When finished give the piece a clean up with a craft knife to remove most of the extruded material. 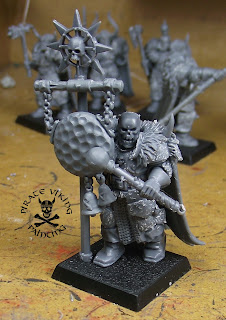 This guy was a total kitbash. I had some plague monks to make some of the Ragged Crusade marauders. I figured that the gong would make a splendidly Nurgle musical instrument for the warrior unit. Simply glue it to a standard bearer arm, trim off the excess and add one of the standard tops to finish the job. Lopping off the weapon head and replacing it with the drumstick end from the Plague Monks polished off the model nicely. Looks properly grim, "Bring out yer dead!". 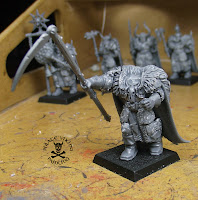 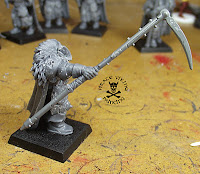 And to round off our look at my first minis we have the champion. This was more of a conversion than the musician. First I dry-fitted a bunch of the parts to be sure that I wasn't going to create an ill-fitting monstrosity. The scythe is from the Empire flagellants sprue (more marauders!) and was attached to the warrior champion arm with delicate application of plastic glue. The important thing in this kind of conversion is flat, 90 degree cuts on the joins. I have a nifty tool called The Chopper II (no, really) that makes this sort of thing a snap. <tangent> Might have to do a "what I use" featurette sometime...</tangent> With plastic models there is no need to pin any componants so long as you have a good join, a decent plastic glue and patience. Once the glue is dry the bond is solid as a rock. It is a much different story to join metal to plastic.

Well that is all, I leave you with this musing, how cool would this guy:


Look as an old school Nurgle Undead Champion? Maybe swop out the weapon head to give him a different profile. Can totally see him leading a unit of chosen. Until next time fellow Dwellers.